The Case of Locked Horns 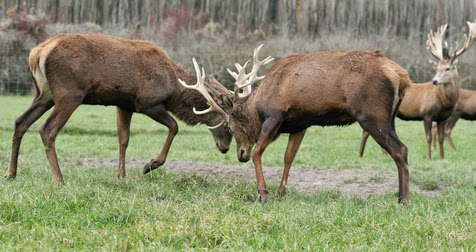 You've heard of two dogs as they tangled one day;
while the third took the bone and with ease ran away.
The lesson is simple, but quickly we state,
to the dogs that were fighting, the loss was not great.
For dog fights are common and seldom 'tis said,
that they fight to the finish, leaving one or both dead.

A more tragic lesson from nature is born
in the wilds of the mountain, 'tis the deer with locked horn.
While the cause of the conflict may justified be,
still, subduing the other, himself he can't free.
Human hands might have helped had they chanced to be near,
to rescue from death at least one of the deer.

Both deer may regret that they started to fight,
but together, they die with antlers locked tight.
As with deer, so with man, in his passionate stress,
"Horns" are locked, often times, and there seems no regress.
Both fear and distrust may smolder and burn,
as souls in despair for deliverance yearn.

Disentangling horns calls for strength and for skill,
yet for all there is hope: look to Calvary's hill
where Jesus was slain in His effort to save
the souls of rebellious men from the grave.
He has wounds that were caused by the weight of our sin
and the full price was paid that our souls He might win.